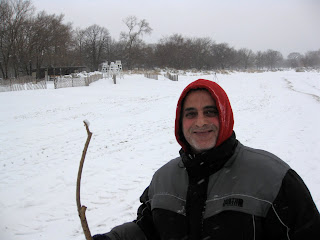 Today's heavy snowfall combined with the ramping up of thesis and trying to locate Jaber made for a challenging time.  I was later arriving due to snowfall on the way back from the Weisman meeting in the Loop.  Jaber went south of Main, while I was north of Dempster, and it took 30 minutes to figure out where he was and have him follow me back to the beach.   Those private streets make it hard to explain.

We drew throught he snow, from 1-4" deep on the beach, with drifts up to 8".  Jaber got too cold for his clothes and his knee was freezing up on him.  My fingers were making for difficulty. 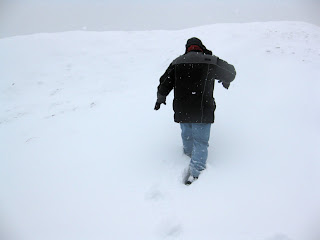 But before we left, after 4,000 lines, we went up the hills of ice to look at the lake.  We went up about eight-ten fee of elevation, over ice and two foot deep snow, to get to the water's edge - slipping and falling all the way, only to find that the water is only about four feet lower than the ice.  It must freeze and drain in order for the lower ice to be so far below lake level. 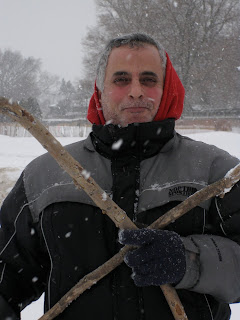 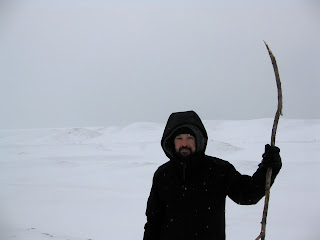 It was great to see Jaber enjoy the weather and cold so much.  He called because he said he couldn't miss drawing lines in such weather.   I haven't seen him since last weekend because his family was moving to Skokie.  Tomorrow he is waiting for a furniture delivery, and after that I'm at CAA till late Saturday. 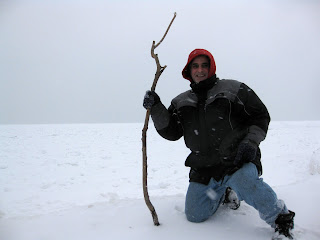 He also wanted triumphant pictures at the top of the ice hill.
Posted by ConsciousV at 7:11 PM