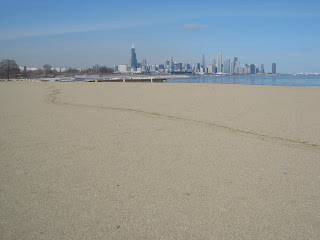 Today was a relatively easy day in that it was sunny and calmer.  I had a shorter stick that was too thin to hold onto with three pairs of gloves, but it was warm enough - about 15 degrees - to not need the third pair.  This appears to be a new beach, and certainly not too frequented, though there were a small number of runners taking advantage of the sun.  I started at the north end of the beach and worked my way all the way to the end, 2-3 thousand lines.  They showed up well with a contrast between the top layer and the soil beneath.  I could still see the fading after four passes even on a calm day.  Performing art which leaves no trace is actually as humbling as it is satisfying.  Most of my career, I have attempted to achieve archival quality in my work - to create pictures or objects that will last virtually forever.  Now I am creating work which can start to dissapear before I'm even finished.   This is such an apt metaphor, as I've said already, for the memory of widows, orphans and residual damage which always follow war.  They are forgotten almost as soon as they are created. 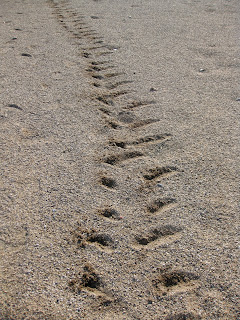 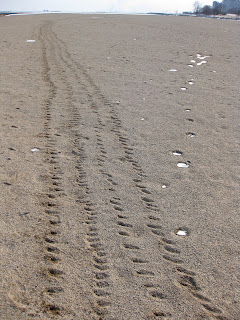 12,000 lines
I also often think of how the lines resemble tracks left from a large vehicle - a jeep, a transport, a tank, and how this relates to mechanized warfare and it's ability to inflict huge casualty numbers in a short time period.  On the other hand in Rwanda machetes killed with equal alacrity, and I am making my lines one at a time with no machinery.

On the way home, I walked around Foster Beach once, and I thought that maybe I saw a dozen or so marks that might be from my drawing last week.  It's almost impossible to say, but they appeared to be those reverse marks made by frozen snow, like the foot prints at Montrose.

It appeared at the end of a long row of marks, that a seagull had tried to help. Surprise beauty. 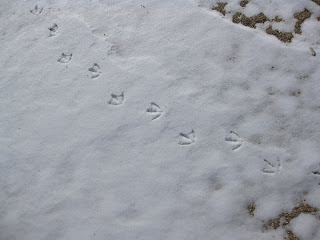 Posted by ConsciousV at 7:27 PM