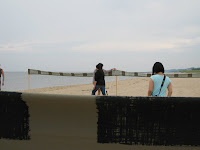 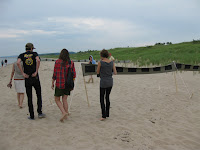 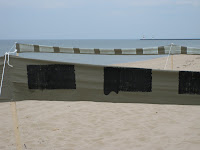 After thought and discussion I decided not to put up the tent yet as the imagery and references were too muddled. My installation consisted of two banners, each 24 feet long stretched on poles in the sand (at the beach) upon which were printed silk-screens of a grid pattern of strokes - one banner in black, one in almost white (light mint green). There was also a flag for each banner, and a larger flag with both images on the same face.

My ideas included: two sides in Iraq killing each other, two tribes at war; despair and hope, death and survival as two states of widowhood; a game where two sides try to win.
piece asks too much of the viewer, even with the title Iraq, those who did not know my intentions had trouble guessing even the simple metaphoric meanings with or without the title. That being said, I think that it could still be a useful piece if I can make more connections.

The performance aspect of the chalk Widows is powerful for me as well as the audience - this piece may need to be translated into a performance. It would be great if the tent was an actual Bedouin design. If I could learn to weave it would be that much better hand-made. And if I could serve people in the tent with Coffee and pillows and weavings on the wall, then I might have something.

I still plan on putting up the tent to document and see what it looks like. Tomorrow I'd like to go to the beach and put it up to see how it feels, and what I could be doing in there - maybe doing the chalk piece inside?
Posted by ConsciousV at 8:11 PM