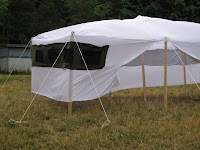 I've been averaging under 4 hours sleep, but managing it well all week. I got up early and printed eight extra prints on the buff paper, of which maybe five were really clean because the screen is getting old and they have no real screen tape (actually I couldn't find any tape at all). Back for a quick breakfast then off to set up my tent in the meadow, in the wind. I set it up and moved the off-center silk screened banner over off and on all morning till it was centered on the tent. I didn't look like a cabana, but then again it didn't quite look like Bedouin tent either, or rather it didn't look like my impression of an Iraqi Bedouin tent - more like something from western Afaghanistan or Mongolia, but made by an artist - but I don't really know.

Critique was fun and informative. I opened by saying that I had three pieces, two time based pieces and ...Oh, wait, I have something for you.... (rummage in back pack for a while) I can't find it... I'll give it to you later" then I just looked out at the class and waited. People were looking and waiting and finally Allison said, "wait, this is your piece, isn't it?" I waited a little more (later people said I should have milked it longer), and said, has anyone heard these words in the last two days, repeating the prompt" Kate raised her hand, and one by one everyone recognized that this had happened to them. Some wanted what that person had. Some couldn't believe that I know enough about them to know who to ask. Omair said that it was somehow sweet that I had taken time to observe and investigate who would be perfect for each person.

Then we looked at the smile cam, which I find interesting to watch and Stephanie didn't think that it was as successful because of the plain-vanilla quality of the action. Everyone loves to smile. I kind of agree, though it was fun to set up, it didn't entice that many people into participating. Perhaps some more unusual instruction would be more interesting - or I could put a secret surveillance camera on the person behind the camera, and post that instead?
Posted by ConsciousV at 9:53 AM