Lines in the Sand for US Casualties 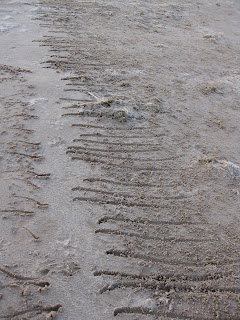 On Veteran's Day I drew 4362 lines in the sand at Montrose Beach in Chicago, one for each war death in the current operaration in Iraq.  It felt empty, thinking about the dead, instead of the living, even though the point is that they are two sides of the same coin.  The weather was cool and the sun set while I was working.  I drew the lines in firm damp sand between a little inlet of water and the beach.  I walked in a circle, covering the whole area, until the circle got so small I was just turning around.  I had just enough room to finish, though the last few rows had shorter lines.  I planted my stick in the center and took a few pictures before packing up at dusk.  The air was crisp, cool and clear. 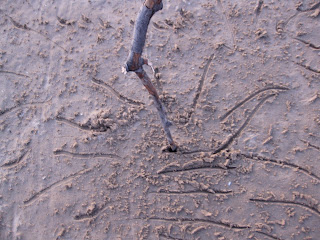