The final book is up and running - it has six layers of video with stereo soundtrack, plus an audio wav file from an earlier performance of the same piece. The book could be more finished, and of course the installation could be more polished, but given time and the small room I have available in the studio space (Room D in the 1104 S. Wabash basement) it looks great.

I spent a good deal of the last week and a half working in MAX/jitter (didn't get to MSP much), learning the program and copying and adapting patches, learning about the "patcher" and other niceties etc... It took three days to get up to speed in order to do the first jit.fade, and a couple of days more and meetings with Paul to get the daisy chain working. The arduino patch worked out easily once I knew which examples to look at.

For simple LDR use, I only needed to upload:
File>sketchbook>examples>communication>graph

Each color is handily assigned to an LDR, divided to weight the sensors and added together for a final controller number.

For sound, I had to set up mutes to keep the tracks quiet while the video was running. All the videos run at the same time, so that they are loaded when the sensor reaches the trigger point for each video stream. But the sound doesn't fade in the same way - it stays on!

I tried muting, and mute patches with triggers but they wouldnt work right. finally I switched to a volume control, and that works almost perfectly. (see below for illustrations):

Using volume control instead of mute: 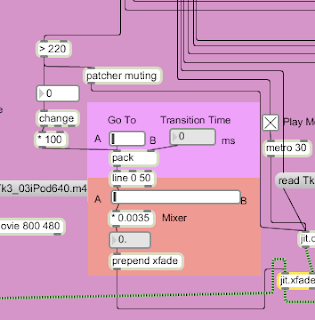 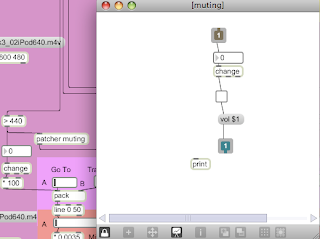 I have yet to resolve the issue with a seventh sound track (the wav file), which needs to be looped so that there is the quiet sound of chalk in the background at all times. It will play through once when the program is first launched, and then stop. I have tried a numer of ways to get it to loop, but it does not yes comply! 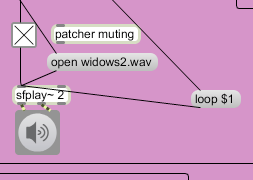 Posted by ConsciousV at 1:09 PM