Just ran across Francis Alys, whose work When Faith Moves Mountains in 2002 involved five hundred people living in a shanty town outside Lima, Peru using shovels, one step at a time, to move a dune 4 inches.  They live in these dunes along with about 75,000 people without running water or electricity.

His words: attempts to translate social tensions into narratives that in turn intervene in the imaginal landscape of a place. The action is meant to infiltrate the local history and mythology...
art operates precisely within the space of myth....
In this sense, myth is not about the veneration of ideals--of pagan gods or political ideology--but rather an active interpretive practice performed by the audience, who must give the work its meaning and its social value. 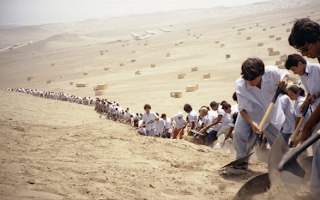 Posted by ConsciousV at 8:06 AM